Jazz Between the World Wars 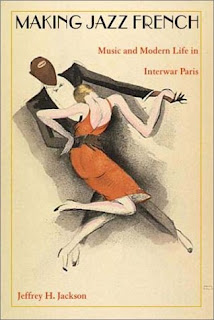 Between the world wars, Paris welcomed not only a number of glamorous American expatriates, including Josephine Baker and F. Scott Fitzgerald, but also a dynamic musical style emerging in the United States: jazz. Roaring through cabarets, music halls, and dance clubs, the upbeat, syncopated rhythms of jazz soon added to the allure of Paris as a center of international nightlife and cutting-edge modern culture.

In Making Jazz French, Jeffrey H. Jackson examines not only how and why jazz became so widely performed in Paris during the 1920s and 1930s but also why it was so controversial.

Drawing on memoirs, press accounts, and cultural criticism, Jackson uses the history of jazz in Paris to illuminate the challenges confounding French national identity during the interwar years. As he explains, many French people initially regarded jazz as alien because of its associations with America and Africa. Some reveled in its explosive energy and the exoticism of its racial connotations, while others saw it as a dangerous reversal of France’s most cherished notions of "civilization." At the same time, many French musicians, though not threatened by jazz as a musical style, feared their jobs would vanish with the arrival of American performers.

By the 1930s, however, a core group of French fans, critics, and musicians had incorporated jazz into the French entertainment tradition. Today it is an integral part of Parisian musical performance. In showing how jazz became French, Jackson reveals some of the ways a musical form created in the United States became an international phenomenon and acquired new meanings unique to the places where it was heard and performed.

“Jeffrey H. Jackson’s work is unique in providing a more detailed history of jazz in interwar France than anything yet in print (certainly in English). Jackson offers a new, rather unusual perspective, concentrating on the ways jazz was integrated into national practices and traditions, rather than portraying it as simply a foreign intrusion into national life. This is a very rich approach to cultural history, offering a far more complex and nuanced understanding of the process of trans-Atlantic cultural interchange than top-down perspectives.”—Tyler Stovall, coeditor of The Color of Liberty: Histories of Race in France

“This lively and innovative book views jazz through the prism of contemporary ideas about 'blackness' and the Americanization of Europe's economy and culture to explore the relationship between culture, race, and national identity in twentieth-century France. Jeffrey H. Jackson reveals a complex interplay of cultural and social forces that stretches from across the Atlantic to the trenches of World War I to the colonies of la plus grande France."—Alice Conklin, author of A Mission to Civilize: The Republican Idea of Empire in France and West Africa, 1895-1930

“A history that reads like a good story, this new book by Jeffrey H. Jackson illumines the multiple reactions to jazz in France, ranging from enthusiasm and fascination to fear and disgust. It also vividly recaptures the broad cultural context and above all succeeds in demonstrating the importance of jazz for the ongoing debate about French national identity and modernity.”—Charles Rearick, author of The French in Love and War: Popular Culture in the Era of the World Wars

“This is an outstanding little book—a highly readable history of jazz in interwar Paris and a brilliant case study of French cosmopolitanism. . . . Entertaining, informative, authoritative, and broad in scope, Jackson’s study will appeal to readers of varied interests. . . .” --Library Journal (Starred Review)

"[A]n enjoyable approach to jazz on the European scene. . . . [A] topnotch reading experience, one that is both entertaining and informative." --Lee Prosser, Jazzreview.com

"[A] welcome addition to the burgeoning field of studies of the impact of jazz in France. . . . Based on careful archival investigation, as well as on very solid and wide-ranging knowledge of existing work, this account includes much new material and is informed by a considerable originality of approach. " --Colin Nettelbeck, H-France Book Reviews

"In the first half of his book, Jackson provides a fresh analysis of the context of the introduction of jazz in Paris and, more significantly, how and why jazz symbolized modern life to the interwar French. . . . [T]he larger importance of Jackson's study is as a corrective: interwar xenophobia and integral nationalism were not the only cultural responses to modernity and the interwar crises in France. Rather the almost mythic French cosmopolitan spirit also flourished during these troubled times, a useful reminder in light of horrors of the 1940s." --Brett Berliner, L'Esprit Créateur

"[M]akes an important contribution to our understanding of how and why jazz was adopted and adapted by the French, investigating the cultural context in which this integration was operated. The whole is underpinned by thorough scholarly research evident in the numerous notes." --Jacques Protat, Review of Popular Music

"Making Jazz French is a valuable exploration of the cultural history of modern France, one that should especially inspire those interested in global perspectives on French history and culture." --Tyler Stovall, The Historian

"Jackson's interesting . . . work traces how a new 'cabaret culture' replaced big dancehalls, examines the effect recording technology had on the spread of jazz, and shows how, by the end of the 30s, the indefatigable French had managed to incorporate jazz into a new idea of a national cultural tradition." --Steven Poole, The Guardian

"[A]significant addition to the history of jazz per se. Along with other recent literature, then, it demonstrates that it is impossible to understand jazz, which is often called ‘America’s music,’ without paying attention to jazz outside the US. . . . The book is written clearly and engagingly." --Paul Austerlitz, Journal of Popular Music Studies

"Jackson's fine study opens the door to such a rethinking of the history of mass culture in the twentieth century and suggests how and why we might look at France in ways that shake us from the numbing predicatability of explaining the failures of the Popular Front and the rise of the Vichy government." --Vanessa R. Schwartz, Journal of Modern History

1. The Arrival of Jazz

2. The Spread of Jazz

3. Jazz and the City of Paris

4. The Meanings of Jazz: America, Negre, and Civilization

7. New Bands and New Tensions: Jazz and the Labor Problem

8. The Discovery of Hot Jazz

Other Links of Interest

Jeff Jackson
Jeffrey H. Jackson is Associate Professor of History at Rhodes College in Memphis, Tennessee. He is the author of Making Jazz French: Music and Modern Life in Interwar Paris (2003) and the co-editor of Music and History: Bridging the Disciplines (2005). For more information, visit http://jeffreyhjackson.blogspot.com